If you’ve ever seen a mentalist perform before, you’ll have a good idea of what mentalism is. A skilled mentalist can leave an audience baffled as they try to work out how they have managed to perform the astonishing mental feats. Whether it’s knowing what people are thinking, or predicting what they are going to do, say or write, it’s hard to understand how something that everyone knows is impossible has just happened in front of your eyes.

When you’ve seen a mentalist at work you might not know if it was mind-reading or mind-control you’ve just seen. All you know is that they’ve performed the impossible and done it in the most entertaining way possible. 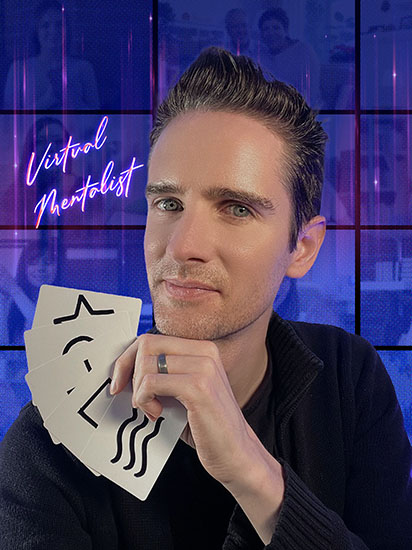 What is virtual mentalism?

But what is virtual mentalism? Well, in short, it’s mentalism for the Covid-age. We might not be able to be together, in enclosed spaces, being entertained by a performance on stage, but that doesn’t mean we can’t be together virtually, watching a show put on just for us. And one that is, perhaps, even more amazing for being done virtually.

Our virtual mentalist can work on any platform, so although Zoom and Microsoft Teams are common choices, they can put on their show using any popular video conferencing platform. Whatever your event, and however you are virtually hosting it, our mentalist can provide some unforgettable entertainment.

How is virtual mentalism different?

Other than the medium, virtual mentalism is identical to the mentalism you might have seen on the stage. This means that you’ll get everything you might expect from a mentalist show, just delivered to a screen close to you.

One of the most entertaining aspects of a stage mentalist is the audience involvement, and that stays exactly the same in virtual mentalism. The mentalist will try to involve as many people as possible, creating an engaging show that can feel more about the participants than the performer. Audience feedback frequently comments that people felt like everyone had been involved in the show.

Perhaps the key differences are the convenience and the spectacle. Because it’s virtual, the audience can be anywhere in the world. Our mentalist is based in Las Vegas and has performed in over 60 countries. But it doesn’t matter if your audience are all in the same small town or scattered across more countries than our mentalist has performed, they can all get together for the same show to share in the experience.

And mentalism somehow becomes even more spectacular on Zoom or WebEx. When you’ve seen a mentalist on stage, you’ve probably been suspicious. Is that audience member a stooge? Is he just reading body language? Was that friendly hand on the shoulder actually a signal? Maybe they were, but when everyone is in a one-inch square on a video conference none of those explanations work. Somehow, a mentalist knows what’s in your mind from thousands of miles away.

What to expect from a virtual mentalist

Our virtual mentalist can work with you to tailor the show to exactly what you want. His shows typically last from 15 to 45 minutes, so they can be used as anything from a main event at a virtual corporate party or as small breaks to keep the energy going during a long online conference.

He’s performed at every type of event imaginable so knows exactly how to put on a show that does exactly what you want. And if you want, he can incorporate features and themes to tie-in with your event, whether it’s a product launch or a review of the year, to offer a unique show.

The mentalist works from a fully equipped studio, so you can be confident of a high-quality experience. With a high-speed connection, studio lighting and professional audio-visual equipment it’s as close to being there as you can virtually get. Oh, and he’s a master on the mute button; this isn’t a stage show on Zoom, it’s a show designed especially for virtual entertainment, so you will get a slick performance that fits in seamlessly with the rest of your event.

The pandemic has changed the way the world works, but that doesn’t mean you can’t have live entertainment. Whether it’s a birthday party for a loved one, or a global conference for thousands, all you need to do is book our virtual mentalist and prepare to be amazed.