by CEA | May 2, 2016 | Tribute Acts Lookalikes and Impersonators 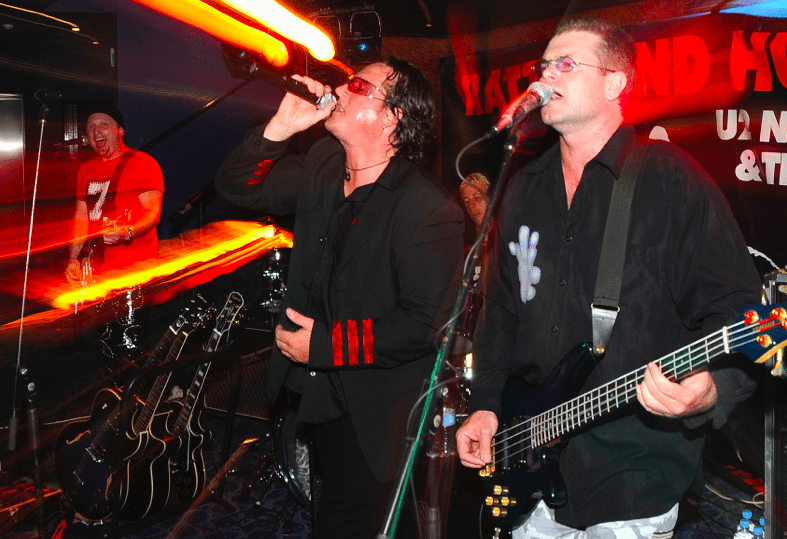 Not only is U2 without a doubt a rock behemoth, it is a band that has consistently achieved charted, commercial and critical success in the music industry over the past thirty years.  Honouring the world’s biggest band is no easy task, but our stellar U2 tribute band will do them justice by making you and your guests feel like Bono and the rest of the Irish rock band are actually present at your event.  Ever since U2 began performing in Dublin, the band has thrived to not be confined by the traditional limitations and standards of what a rock band and rock music should be like. Over the years, U2 has combined an original sound and sincere lyrics to present a demanding yet inspiring social message.  No wonder they are highly acclaimed by their critics and peers alike, and have quite a zealous fan following allover the globe.

U2 has also become so instantly recognisable because of Bono’s awe-inspiring, heartfelt singing, the Edge’s complex and textured guitar riffs, and the powerful and steady combination of bass and drums by Adam Clayton and Larry Mullen Jr.  While they continue to influence the worldwide political agenda with songs like With or Without You, Every Breaking Wave, Sunday Bloody Sunday, The Miracle and Sunday Bloody Sunday, Pride, Bullet the Blue Sky, Please, and Mothers of the Disappeared, their sound has undergone constant tweaking and even complete makeovers.

Fortunately, our tribute band happens to be talented enough to ensure that you and your guests will be listening to the authentic U2 sound and style of music even when the Irish rock band is not actually in attendance at your event.  They will perform all of the band’s billboard hits and more with excellence, just like U2 would, leaving your guests with an outstanding, unforgettable musical experience.  Our tribute bands not only look like the members of U2, they will also perform and sound like them.  If you are planning to host a concert, corporate function, ceremony, festival, gala dinner, private party, themed event or any other occasion, then hiring our U2 tribute band will make your guests feel like they just walked into a genuine U2 concert.